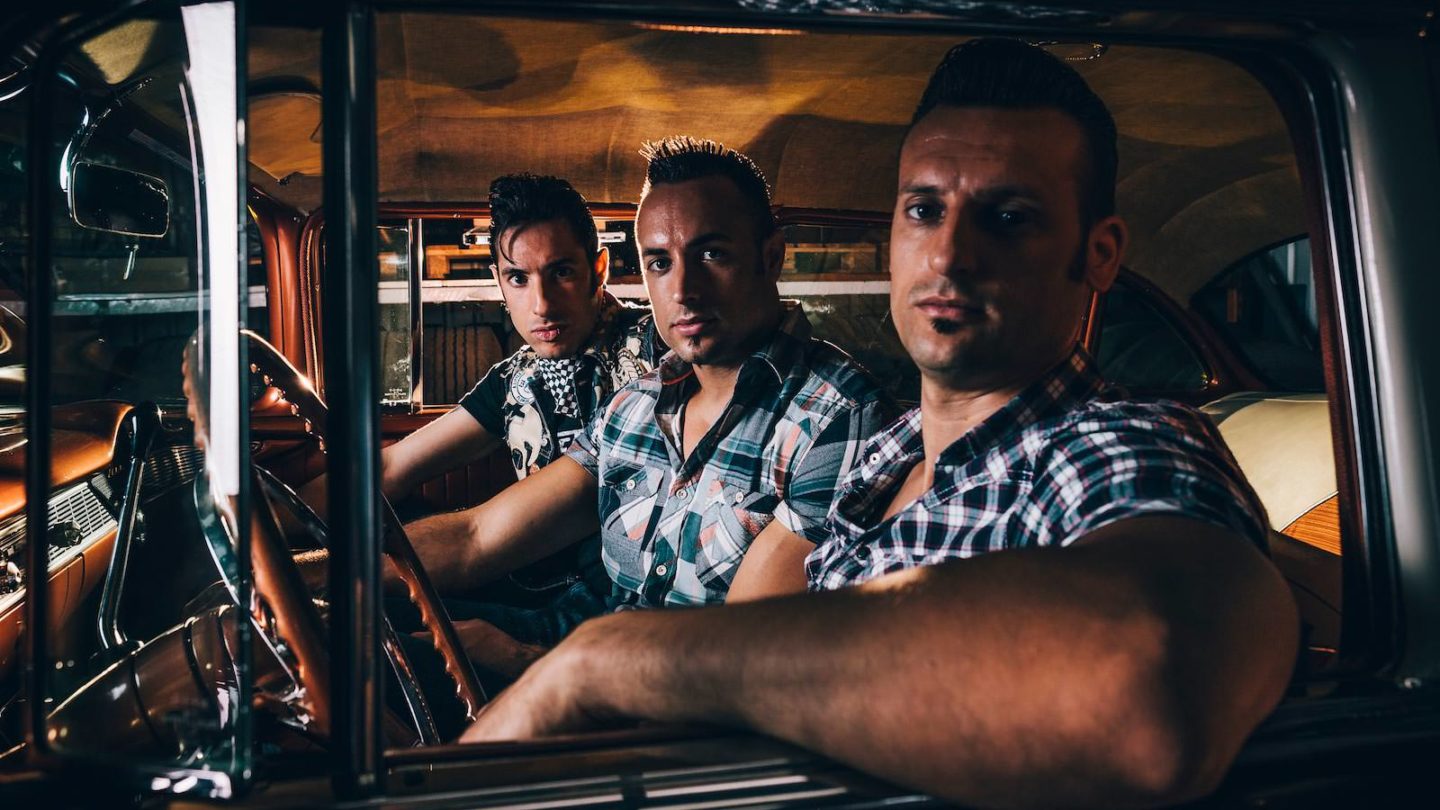 The Houndogs – Up Close and Personal

We have taken this opportunity to have a chat with one of our most talented and, certainly, energetic bands to find out what makes this sensational trio keep on rockin’.

Over the last 15 years, The Houndogs have built a reputation as one of the nation’s favourite Rockabilly and rock n’ roll bands. All self-taught, the three Wilson brothers, Robert, Ian and David have been playing together for 24 years. They began with Dad, Bob, on vocals and Mum, Jill as chief roadie and van driver. Their colourful career so far has consisted of playing a combination of their own songs and their own versions of classics alongside mesmerising and unique performances. The band have performed on national TV several times, played with members of the Stray Cats, played at the wedding of (and with) Tom Chaplin, lead singer from Keane and played 50 nights in a row at Hyde Park Winter Wonderland.

What are your most memorable moments?

Oh, there are so many…one of the best moments was when we got to play with Lee Rocker, the bass player from the Stray Cats, in 2005 at The Chicago Rock Café in Peterborough. Another highlight was when we toured with Slim Jim Phantom (the Stray Cats’ drummer) and performed our biggest ever gig at The Rewind Festival in front of 40,000 people.

“It’s all about the atmosphere.”

But the big ones aren’t necessarily the most memorable – it’s all about the atmosphere. Some of the gigs we played at the Golden Fleece in Stamford have been particularly memorable and great fun. The crowd was amazing, every single time and we are much more comfortable playing up close to the audience. Sometimes you feel disconnected when you play a larger gig – you almost need binoculars to see who is at the back of the audience and wondering whether they are cheering for us or someone else!It’s all about having a great gig. The most important thing is we feel that we played well. It doesn’t matter if there are five people or 5000 – it’s important to feel we have done a good job!

What’s your favourite food on a gig night?

(Laughing), we can tell you what our worst food is– a hog roast. We would rather have anything else! Our favourite food is most definitely curry – although the way we jump around on stage, we have learned to wait to eat after the gig!

Who is the best singer?

Sing? We all warble! Dad was an amazing singer and when he became ill, we had to learn. It was a long process and we were pretty bad at first, but worked hard and chose songs that suited our voices. Ian does Elvis the best, Robert has the more rocky/punk/growly voice and David is somewhere in the middle – but we do know our limits, which is annoying as there’s no song we cannot play but there are songs we can’t sing.

In all seriousness, we are confident with the playing and the showmanship on stage – for example, if we are in a festival with say 10 other bands, we are never frightened about where we are positioned – our show carries us through. We never feel intimidated by other bands.

Who are your musical influences?

The Stray Cats as a band are what we modelled ourselves on and Elvis is a huge influence (and Bill Black and Scotty Moore) from the early days, particularly his Sun Recording Sessions from the early 50s.

Where do your acrobatics come from?

We are always trying to come up with new ideas. Setting fire to the cymbals is inspired by Jerry Lee Lewis who used to set fire to his piano and standing on the double bass originates from Bill Haley (The Comets). We had three double basses on stage recently, which worked well as a piece of theatre and was a bit of fun. We play the ‘Guitar Boogie’ with two of us playing the same guitar at once. We tried it with the three of us playing but it ended up more like a game of Twister!

To see the Houndogs live, head to the Merry Monk, Oakham on Thursday 27th June, 8:00pm. Free Entry! They are also playing at the Barn Farm Campsite Festival on Sat 13th July. For further information or to book this dynamic trio, log on to www.pureartists.co.uk 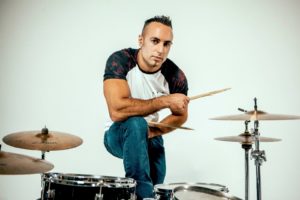 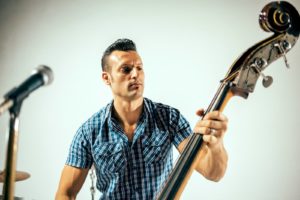 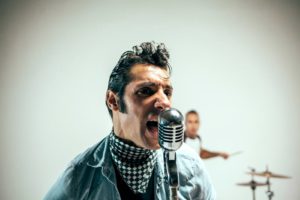 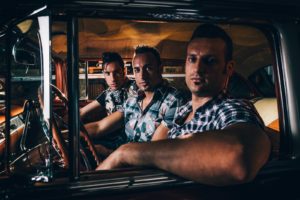 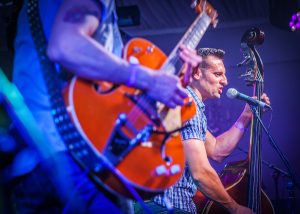 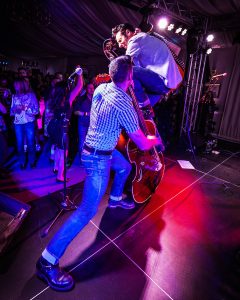 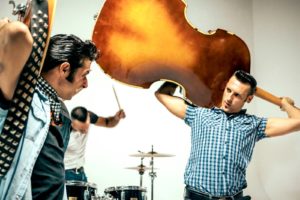 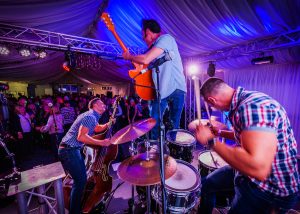 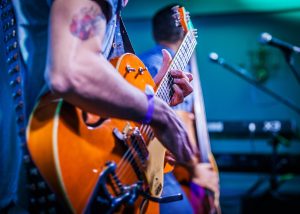 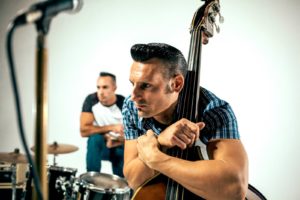 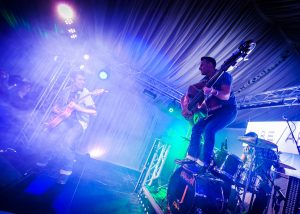 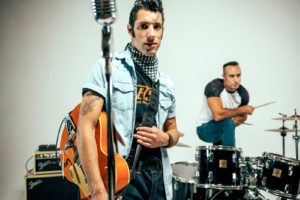 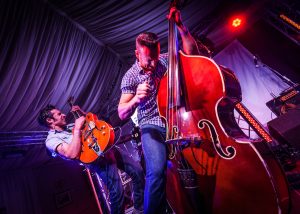 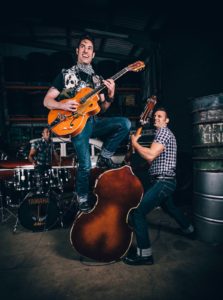 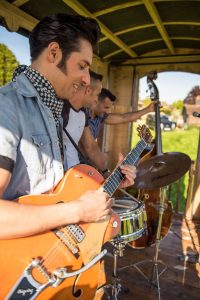 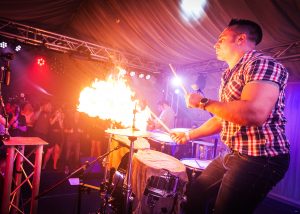 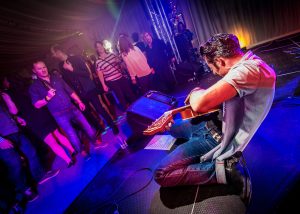 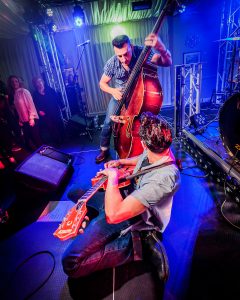 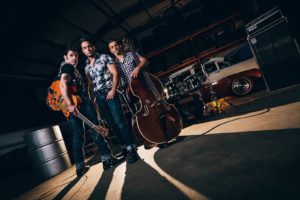 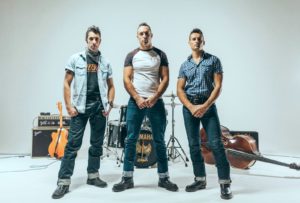 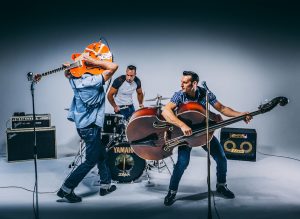